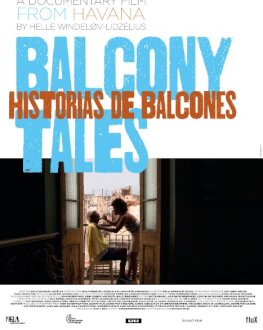 Everybody in the city of Havana knows that it’s better to walk in the middle of the street and not on the sidewalk, where you may be hit by a crumbling balcony. Still, the balcony is a loyal friend, connecting people with their neighbours, the hawkers, the noise and smell of the street. Ceci has spent his whole life here. Now he is old and blind, but not alone. He has his balcony, from which he shops, hears important news and calls for Edilia, a young woman from the opposite side of the street who takes care of him like a daughter. This warm-hearted, unspectacular relationship forms the framework for a filmic declaration of love to the balconies of Havana.

The lack of government regulation allows Ukrainians to build any balcony regardless of the style of the building, to the point that people sometimes rebuild them to be bigger than the apartment itself.

The film explores the balcony as an informal architectural form that is uniquely Ukrainian. It is a journey through the decades, examining both balconies and their owners in cities across Ukraine. Through these stories the film uncovers Ukraine’s post-Soviet history — people’s lives, the culture, and the relationship between personal and public space in cities.

Enter Through The Balcony | Trailer | Documentary from Minimal Movie on Vimeo.