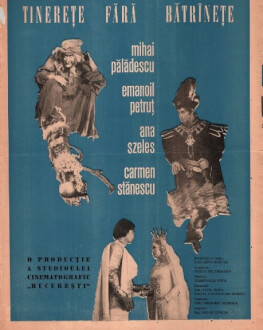 Screenplay: Elisabeta Bostan, adaptation of the fairy tale with the same title by Ion Ispirescu

Trying to stop his baby from crying, an emperor promises to give him youth without age. When he grows up, the emperor's son goes on the lookout for his promised gift. He finally reaches the boundaries of the land of endless youth. But, to be allowed in, he must fulfill three commandments. After many adventures, the emperor's son succeeds in fulfilling them and he marries the princess of the land and becomes immortal. But one day he drinks water from the spring of yearning and he begins to grow old. The princess also drinks from that water and the two - now mortals - leave the empire.

The film premiered in Romania August 4th, 1969. It received many international prizes among which Golden medal at Mar del Plata film festival in 1969.