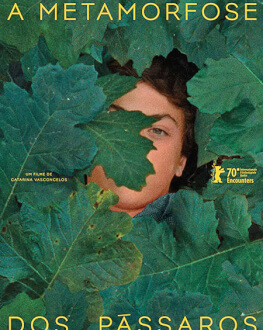 Catarina Vasconcelos’ debut feature is structured like an emotional and narrative kaleidoscope which combines images, textures, colours, voices, sounds, stories with a nonchalance that many gigantic filmmakers like Manoel de Oliveira or Raul Ruiz only reached after many years of activity. The young director’s audiovisual construction is so elaborate that, even after repeated viewings, it seems just as fresh and mysterious as the first time. A documentary-essay about the loss of the mother and, equally, about recovering lost time, “The Metamorphosis of Birds” attempts to recreate feelings and sensations from the past – oftentimes olfactory or tactile ones -, rather than to present a discourse on a certain subject. And the past is not some stable entity, but takes all sorts of forms and consistencies, as it is brought back to life in its complex volatility made up of mixed memory fragments which often crystalize in the form of contradictory structures, with no apparent links between them. Hence the fascination aroused by this film, which sweeps the viewers off their feet and turns mourning in one of the most fulfilling cinematic experiences possible. (by Andrei Rus)

Catarina Vasconcelos was born in Lisbon, Portugal, in 1986. After graduating from the Fine Arts Academy Lisbon, she moved to London to study at the Royal College of Art. Her graduation project, the short film ”Metaphor or Sadness Inside Out,” won the Best International Short Film award at Cinéma du Réel in 2014 and went on to screen at festivals including the Montreal International Documentary Festival, DOK Leipzig, the Moscow International Film Festival and Doclisboa. ”The Metamorphosis of Birds” is her debut feature film.