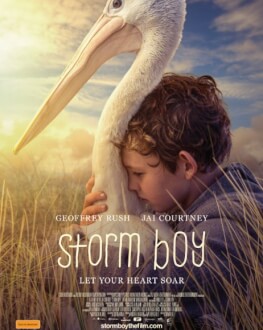 Synopsis: Michael Kingley (Geoffrey Rush), a world-weary retired businessman, travels to Adelaide to vote as a director of the company he founded on the leasing of farming land in the Pilbara region to a mining company. His son-in-law, Malcolm Downer (Erik Thomson), is confident the board will approve the lease without a hitch as they are all, it would seem, on the same page. However, Michael starts to see things he at first can’t explain, and the vote is delayed a day when a storm unleashes its fury, wrecking the company’s boardroom. Malcolm travels to Sydney on urgent overnight business, leaving Michael to join his sixteen-year-old granddaughter Maddy (Morgana Davies) and spend time with her at the Downer family home.

Maddy is angered by the company’s pending decision and its environmental impact. She directs her fury towards her father who supports the lease. To help repair Maddy’s relationship with her father, Michael tells his granddaughter the story of his childhood, when as Storm Boy (Finn Little), he lived a lonely existence with his father Hideaway Tom (Jai Courtney) in a small shack between Ninety Mile Beach and the Coorong in South Australia. Tom retreated to the coast after experiencing personal tragedy. He wanted to protect his son from a harsh and unforgiving world.

The Coorong has a bird breeding ground and a hunting area and one day, after befriending an Aboriginal man, Fingerbone Bill (Trevor Jamieson), Storm Boy rescues three pelican chicks whose mother has been killed by hunters. Storm Boy fiercely dedicates himself to rearing the weak and vulnerable animals, naming them Mr Proud, Mr Ponder and Mr Percival. The pelicans grow and Storm Boy reluctantly returns them to their breeding ground, so they can live in the wild, amongst their own kind. However, Mr Percival soon returns and the extraordinary bond between the two changes Michael’s life forever. A pending vote to turn the hunting ground into a bird sanctuary brings danger into their secluded world and when sudden tragedy strikes again, Storm Boy is pushed into the outside world.

As Michael tells his story to Maddy, the reconnection with his past, as Storm Boy, brings him back to life and he makes a decision that will impact not just his future and that of his family, but the future of the precious world around him.