ARTISTA, DOLARII ȘI ARDELENII / THE ACTRESS, THE DOLLARS AND THE TRANSYLVANIANS

ARTISTA, DOLARII ȘI ARDELENII / THE ACTRESS, THE DOLLARS AND THE TRANSYLVANIANS 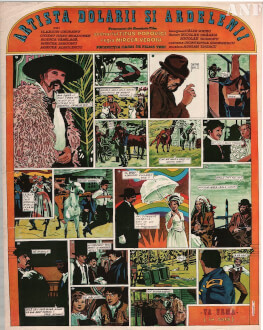 Three Transylvanian brothers, Johnny, Traian and Romulus, want to leave America and go home. On their way back, Traian meets Annabel, a frivolous singer he decides to marry. But on the background of the local Indians fighting the gang of thieves lead by Wilkinson, the singer's friend, the woman is exposed: she is Wilkinson's accomplice and only wanted to lay her hands on the Transylvanians' money.