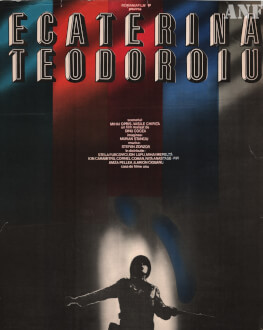 ECATERINA TEODOROIU
Romania / 1978 / 106’ / color / Biographical movie, War / AG
Directed by: Dinu Cocea
Screenplay: Mihai Opriș, Vasile Chiriță
With: Stela Furcovici, Ion Lupu, Mihai Mereuţă, Ion Caramitru, Cornel Coman, Elena Sereda, Niţă Anastase-
Fifi, Amza Pellea, Ilarion Ciobanu
Produced by: Film House 1
It&#39;s World War I. The film presents the feats of arms of Ecaterina Teodoroiu, the first woman officer of the
Romanian army. It begins with her working in a field hospital close to the front, continues with her being a
junior lieutenant of a platoon and ends with her being killed in the battle of Mărăşeşti.
The film premiered in Romania December 4 th , 1978. It received ACIN Awards Best Sound and
Diploma of Honour for Best Debut (Stela Furcovici) in 1978.

ÎNCĂ UN RÂND / ANOTHER ROUND