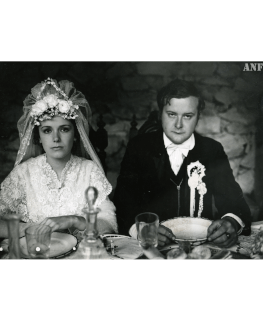 The film consists oftwo stories: "Fefeleaga" and "At a wedding"

1. Fefeleaga: A woman whose husband and children died hopes that her last daughter will survive the illness that killed her brothers and father. To bring her up, the woman works hard, carrying gold-bearing ore on the back of a blind old horse. When her daughter dies, the woman has to sell the horse to bury her.

2. At a wedding: Two musicians come to a wedding where a girl is unwillingly getting married. While one of them distracts the table companions, the other elopes with the bride who fell in love with him. The wedding guests will kill the remaining one.

The film premiered in Romania January 29th, 1973. ”At a wedding” is the fiction debut of the director Dan Pița.