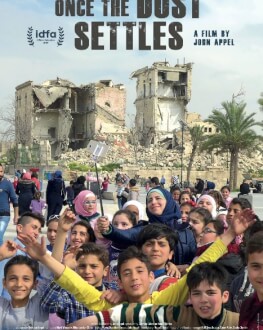 Amatrice, Chernobyl, Aleppo: three iconic disaster sites from modern history. Constructed as a cinematic triptych, Once the Dust Settles shows what happens when the dust has settled and the camera crews have left for new catastrophes. The film centers around the evocative stories of survivors who are now trying to rebuild their lives. Alexei Breus, the only operator from the nuclear plant’s control room to survive, now works as a tour guide at the amusement park which Chernobyl has become. Gina Zobian, one of Syria’s best tour guides, who before the war used to show tourists around the archeological monuments, now waits in Aleppo’s ruined centre for the first tourists to return. And Amatrice’s pastor and former tour guide Luigi Aquilini now has to face the fact that his town will never be rebuilt.

Once the dust settles - trailer (English) from COBOS FILMS on Vimeo.