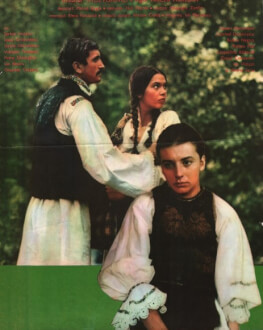 Being a needy peasant, there's nothing Ion (Șerban Ionescu) won't do to have his own land. He seduces Ana (Ioana Crăciunescu), the daughter of Vasile Baciu (Petre Gheorghiu), one of the rich men of the village, and after she gets pregnant, he haggles with her father over the dowry. Realizing that she means nothing to Ion who only cares for her land, Ana commits suicide. Ion also dies: the husband of Florica (Sorina Stănculescu), the girl whom Ion loved but didn't marry because she was needy, too, kills him.

The film premiered in Romania April 14th, 1980 and it was screened as a film in two parts: ”The Curse of Land” and ”The Curse of Love”. It won Special Jury Prize, Best Cinematography Prize, Best Actress Prize (Ioana Crăciunescu) and Diploma of Honor (Șerban Ionescu) in the 1980 edition of the ACIN Awards.