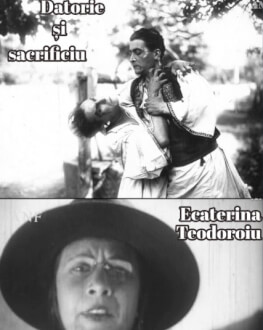 Ion and Ilie, two lads living in the same village love Ileana, the mayor's daughter, who only loves Ion back. The rivalry of the two lads grows bitter until they are mobilized in the same regiment for the front and Ion is badly wounded on duty. Believing that Ion's dead, Ilie deserts hoping that it will be easier for him to marry the girl now, but as he runs away he is shot dead by an enemy's bullet. Getting better and being decorated, Ion goes back to the village and marries Ileana.

The copy kept by the National Film Archive is not complete, missing the final part of it. This film is the film debut of the actor George Vraca.

During World War I, young Ecaterina Teodoroiu leaves home on the lookout for her brother enrolled on the front. As she finds him dead, she decides to fight in his place, but an enemy bullet kills her while she heartens the brothers in arms. The film reconstitutes positive battle scenes such as the defense of the bridge across The Jiu played by the real heroes of this war episode lead by police commissioner Pompilian himself. It is also inserted the authentic filming of Queen Maria's visit to the hospital where Ecaterina Teodoroiu lies wounded, which was taken from the cinema records of the war. Moreover, the heroine's real mother who accepted to play her own part plays the part of Ecaterina Teodoroiu's mother.

The film premiered in Romania January 8th, 1931 and it was screened as a sound movie being shot as a silent movie and sounded after that.The copy kept by the National Film Archive is not complete, missing the final part of it.