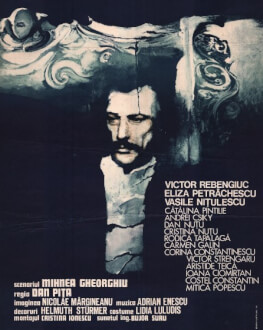 Screnplay: Mihnea Gheorghiu, adaptation of the novels ”Life in the countryside” and ”Tănase, the Siskin” by Duiliu Zamfirescu

Tănase Sotirescu, nicknamed "Tănase the Siskin", a social climber inhibited by his humble origin, persuades Dinu Murguleţ, a declining old landlord, to give him the hand of his daughter Tincuţa in marriage, in exchange for the cancellation of his debts. Even though this match helps Tănase get into the high society of the end of the XIXth century, and even become a member of the government, he proves to be an unscrupulous man, humiliating his wife and oppressing the peasants on the landlord's estate. After Tincuţa dies of bitterness, the peasants rise in revolt and kill Tănase.