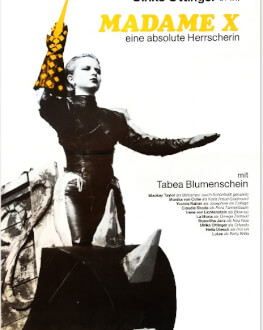 Ulrike Ottinger’s debut feature proposes one of the most hypnotic viewing experiences possible. Constructed in the form of an allegory, in which women from all around the world, of different ages and with various occupations, travel to a mythical place, a ship whereon a female authoritarian ruler with a generic name (Madame X) had created a community formed exclusively of women liberated from the constraints of patriarchal society, the film is representative for the director’s first experimental works. Mainly composed of choreographed scenes and carefully staged, extremely elaborate, and chromatically refined tableaux, “Madame X” is a radical feminist utopia, one with a minimal narrative, yet abundant in philosophical and cultural meanings. And it is of an intoxicating visual beauty, an aspect which is controlled by Ottinger as well (she is also the director of photography for her films), thus reminding one of the visual and expressive force of some American Underground films from the previous decade – works such as “Flaming Creatures,” directed by Jack Smith, or “Chumlum,” directed by Ron Rice -, but oftentimes outshining them in this regard. (by Andrei Rus)

Gender Talk is a community of non-binary, trans, and fellow cis explorers, who question gender as we know it. We believe that our gender identities exist outside of the woman-man binarity, and this is something to be celebrated and explored, not hidden and ostracized.

For 5 years already, we have been creating communities and we’ve been having conversations aimed at expanding the way in which we understand each other and the world around us. Everyone has a gender identity and is exposed to gender stereotypes and constraints which have an impact on our lives ever since we are born. An expansive thinking in regards to gender can bring better self-knowledge and, perhaps, a little less pressure to fit a small, limiting box. No matter our gender, be it trans or cis, binary or non-binary, each of us deserves to live freely and to liberate ourselves from social gender pressures.