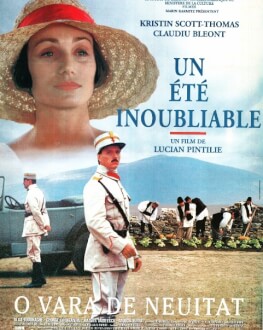 Screnplay: Lucian Pintilie, adaptation after the chapter ”The Lettuce” of the novel ”A Family Chronicle” by Petru Dumitriu

To protect his wife (Kristin Scott Thomas) against the approaches that an arrogant colonel - his senior in rank - makes to her, captain Dimitriu (Claudiu Bleonț) requests permission to join another regiment. He is sent to a frontier garrison in Cadrilater, a province that Romania annexed from Bulgaria after the war of 1913. When the Macedonian smugglers kill some of his frontier guards, Dimitriu takes several Bulgarian peasants as hostages. But his wife treats them kindly and in return they teach her to grow vegetables. The order to shoot the hostages starts a drama in the captain's family. Since he refuses to obey this order, he is dismissed and forced to leave the garrison while the peasants are killed.

The film premiered in Romania April 21st, 1995 and it was selected in the Official Competition of the Cannes Film Festival from 1994.