The Country + A Comedian in a Syrian Tragedy 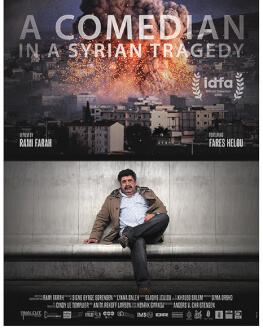 Chady and David are two contemporary sailors, brought together not by wanderlust (as is usually the case with tales of seamen and pirates), but rather by the mirage and necessity of exile. They both travel and work far away from their native land and families, on various ships that sail the seas of Sweden, sharing a common destiny of (self)exile and recognizing in each other the particular reflection of their own inner turmoil.

Aside from his discourse on rootlessness and abandonment, Lucien Monot maintains a certain something from the world of fairy tales: a fluid, quivering dream, a journey into the world of childhood, a fraction of a second throughout which turbid phantasms and dreams glide along. On board the ship, nostalgia and dreams converge, and between the two realities – of the native land and of the slippery, shifting adoptive space – the boundaries slowly dissolve. (by Andreea Chiper)

A Comedian in a Syrian Tragedy

Filmed over several years, Rami Farah’s documentary is a testament to aspirations rendered futile by the Syrian civil war. What started as an uprising against a tyrannical leader, in the wake of the Arab Springs, gradually became a generalised massacre, under the helpless eyes of those who had pioneered the social movement. One of them, actor Fares Helou, is the protagonist of the film, who uses his notoriety to aid the revolutionary cause before he is forced to leave the country. The filmmaker follows him to France, where Fares and his family live in asylum, capturing without complacency the actor’s worries, set against both his efforts to adapt to a new life, and the violent escalation of the conflict in Syria. While his daughters gradually integrate in French society, Fares, more and more, takes refuge in the attic to watch on social media fragments of the events taking place back home, still hoping for the eventual downfall of dictator Bashar al Asaad — a hope that we, the viewers of 2020, know to be in vain. (by Liri Alienor Chapelan)