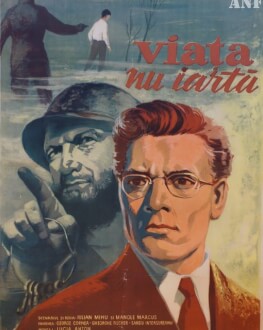 Screenplay:Iulian Mihu, Manole Marcus, adaptation of the short stories ”The death of the young soldier”, ”Father’s come back from war” and “The blood-red field of Mărășești” by Alexandru Sahia

During World War II a young man lying in his death agony on the front remembers significant moments of his life connected with World War I, such as his father's coming back from war crippled and mentally disturbed and his confinement in a madhouse, a mutilated guard's relatings of his father, the fact that a leaflet exposing the very responsibles for the out breaking of the war was not taken into consideration. Thus, ignoring the warnings of life, the young soldier fell a victim prey to another preposterous war.

The film premiered in Romania February 3rd, 1958 and it is the fiction debut of the directors Iulian Mihu and Manole Marcus. The first version of the screenplay was written by Iulian Mihu, Mircea Drăgan and Manole Marcus and it was titled ”When mist rises”. The releasing of the film experienced difficulties because of the ideological censorship.