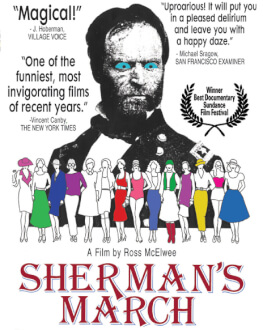 At the beginning of "Sherman's March," we are made to understand that McElwee had originally planned to make a film about the aftermath, still felt in the American South, of the ''total warfare'' waged by the Confederate General Sherman during the American Civil War. But just before filming is about to start, McElwee’s girlfriend ends their relationship. He is 33, still not married, and in limbo. His older sister is very critical about his scraggy appearance and laid-back lifestyle. She wonders if he will ever get himself together. Feeling pressured by both her and by their parents, McElwee shifts his focus to finding a “nice Southern girl.” The attention of the women he meets feeds his own self-doubt and strikes him with a level of anxiety that is equaled only by the threat of nuclear war. All the while, McElwee’s apparently aimless exploration of the South delivers insights into his complex relationship with his native land - a dynamic he compares to that of Sherman’s with his own home, whose love for the Southern States did nothing to prevent him from being deeply hated there. (by Vanina Vignal)