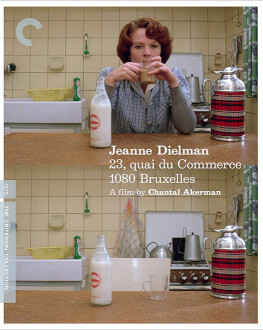 When summed up, Chantal Akerman’s film may sound like an extremely banal lesson in cinema: a few days in the life of a woman who splits her time between housewife chores and episodes of clandestine prostitution. However, bit-by-bit, the 200 minutes of film-play become inhabited by the protagonist’s presence, while her surroundings begin to unsheath all their layers, and we come to understand that what the director puts at steak is much greater. “Jeanne Dielman” is a study on rhythmicity, on a painstakingly calculated life and on how femininity, confined within fixed parameters, can burst in the most unexpected ways. And, not in the least, on life which cannot be added into the equation of absolutely equal cadences.

The film is masterfully orchestrated, where seemingly idle scenes — such as preparing a schnitzel or folding bedsheets — become examples of directorial finesse, patiently revealing aspects of the everyday. Delphine Seyrig’s character is a reiteration of all cinematic feminine figures: silent ticking time bombs, hidden under the thin membrane of mechanical gestures. (by Andreea Chiper)