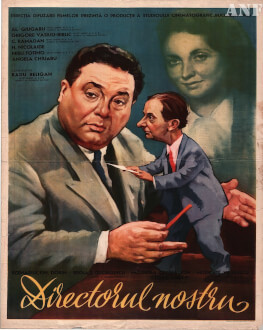 Screenplay: Gheorghe Dorin (Eduard Mezincescu), adaptation of the story with the same title written by the same author

The director (Alexandru Giugaru) of an ineffective enterprise where chaos is the real ruler decides to start taking into consideration the oppinion of his discontented employees regarding the weak points that made things go wrong. For the beginning, he speaks with Ciubuc (Grigore Vasiliu-Birlic), a humble and fearful office worker, who - in his youth - used to be an upholsterer. Believing he is called in to express his opinion about the chairs in the institution, Ciubuc speaks about the departments where they creak the most. The director is satisfied with his alleged honesty and promotes him. Once the director is dismissed as a result of an inspection from the ministry, Ciubuc gets back to his former position.

The film premiered in Romania March 29th, 1955. The characters played by Alexandru Giugaru and Grigore Vasiliu-Birlic were written specially to highlight this couple of comedy actors of the time.