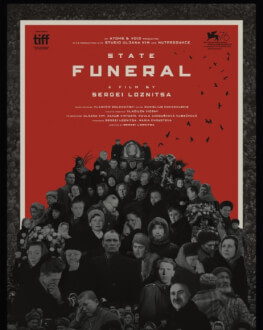 Moscow, March 1953. People are waiting in endless queues to pay their final respects to their defunct Soviet leader. A gentle male voice resounds from the speakers, enveloping the crowds in words of sorrowful longing and regret for the departed. Perched up on a scaffold, a few workers look on the enormous portrait of the dictator which levitates above them, adorned with little red flags. These are just some of the scenes from the great spectacle that was Joseph V. Stalin’s funeral ceremony, a gigantic machinery meant to amplify the echo of terror and lies, and to perpetuate his personality cult even beyond his death.

Sergei Losnitza skilfully recomposes the absurd tableaux of his burial, an event that history remembers not only because of its grandeur, but also because, in essence, it says something about the mechanism of fear, about how the ghost of Stalinism lingered in the world long after the demise of the man who had ordained it. At the same time, the archival images discovered by the director work as a memento: however deep it may be buried, the past constantly shapes the foundation of the present. (by Andreea Chiper)