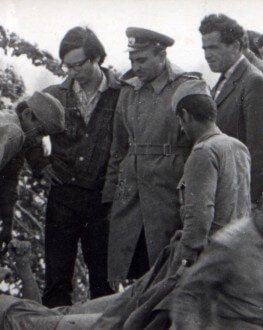 ”About two weeks had passed since the floods broke out and we went to the water overflow in Brăila. Diferent episodes were shot, without any structure or any draft of script, improvising. I met people in danger, or after the danger passed - and people, in such situations, impress you, some of them speak from the heart. But it was important that we got closer to real people, that the words belonged to them and that a commentator did not drown them with his remarks, as is most often the case in Sahia documentaries. Eventually, Black Buffalo Water was put in a box and forbidden for ideological reasons. "(Stere Gulea, Film Menu, 2013)