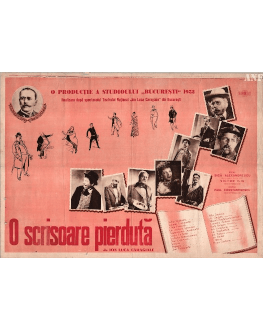 Screenplay: the play with the same title written by Ion Luca Caragiale

To obtain the vote of the adversaries, Nae Caţavencu (Ion Talianu), the leader of the opponents, blackmails Ştefan Tipătescu (niki Atanasiu), the town prefect, with the publication of the latter’s love letter to Zoe (Elvira Godeanu), the wife of Zaharia Trahanache (Alexandru Giugaru), the president of the leading party and a good friend of Tipătescu’s. Things complicate when Bucharest proposes another candidate for the elections, Agamemnon Dandanache (Radu Beligan), who, in his turn, had used for his promotion a love letter of a very influent person...

The film fully respects the narrative course of Caragiale’s play which reveals the demagogy of the members of two rival political parties in a XIXth century Romanian provincial town around elections.