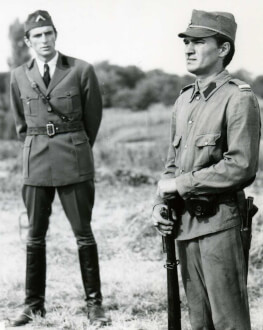 Having recently left the military hospital where he had been treated for a wound that a subordinate had caused him, junior lieutenant Roşu (Romeo Pop), a severe but fair man, gets back on command of his battery of anti-aircraft artillery. The days following to August 23rd, 1944, the unit would heroically fight and blow down the German fighters and bombers that took off the Otopeni airport. And it's only after Roşu is killed in the battle that his subordinates realize that, underneath his mask of sternness, he was a man of character.

The film premiered in Romania March 25th, 1974. It received Best Script Prize in the 1974 edition of the ACIN Awards.