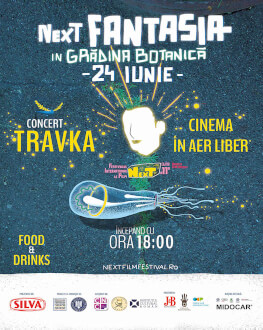 Inspired by the famous 1940 Disney studios’ animation, NexT Fantasia’s title isn’t just about the short films’ content, but also about the ability to rethink the passion for cinema around a unique event that unites the love of films with that of music and with the pleasure of having a picnic in a place that is as popular as it is unusual in regards to such an event. We encourage the audience to bring their own blankets to make the most of this unique screening under the moonlight.

Seen as an extension of the magical „Sânziene” Night, NexT Fantasia includes a Travka concert and a screening of five short films that approach dystopic, magical or fantastical worlds. While some of them are based on imaginary conventions, talking about a fictional world (The Absence of Eddy Table, Love, Amalimbo), whereas others are forms of magic realism (in Malesh, magic is suggested rather than pointed out, but in Leshy mythological monsters do appear).

At the gate the tickets will cost 30 lei.

*This ticket is valid for both the screening and the concert, but an entrance fee of 5 ron must be paid at the entrance, for the Botanical Gardens.