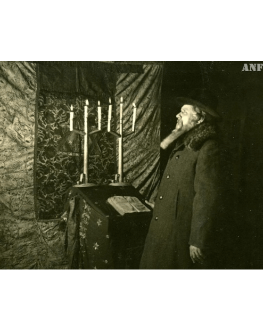 Screenplay: Scarlat Froda, adaptation after the play with the same title by Ronetti-Roman

Lelia Cohanovici (Dorina Demetrescu), a young Jewish woman from the capital falls in love with Matei Frunză (George Aurelian) who is a Christian, but her parents, Nissim (Pepe Georgescu) and Esther (Maria Ciucurescu), want her to marry their coreligionist Emil Horn. Old Manasse (Romald Bulfinski), the girl's grandfather and the spiritual leader of the Cohanovici family comes all the way from Fălticeni to attend the wedding. But on the day of the ceremony the girl runs away to Matei. The relationship between the two young people and their wish to get married are little by little accepted by the Jewish family members, except for the fanatic Manasse who will die of bitterness when he sees that all his efforts to prevent this fail.

The film premiered in Romania October 31st, 1925 in Frascatti Hall from Bucharest.

In 2019, the film participated in the programme ”Videograms of a nation” for EUROPALIA Festival where Romania was invited as special guest.