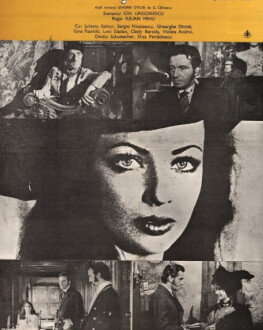 Screenplay: Ioan Grigorescu, based on the novel ”Otiliațs Mystery” by George Călinescu

Come to Bucharest to study medicine, young Felix finds accommodation at his uncle's, Costache, a rich but avaricious old man. He falls in love with Otilia, the old man's orphan niece, who is also courted by Pascalopol the landlord - a mature and sensible man. Focused on their idyll, Felix and Otilia helplessly witness Costache's relatives fight over his fortune. In the end the old man dies after Stănică, the husband of Olimpia, his eldest daughter, robs him. Although Felix asks her to marry him, penniless Otilia joins Pascalopol, choosing welfare over true love.