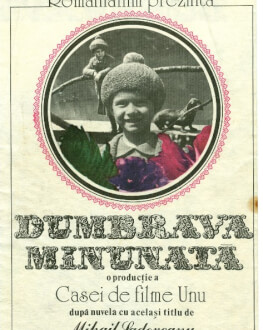 Screenplay: Draga Olteanu Matei, adaptation of the short novel with the same title by Mihail Sadoveanu

Deprived of affection in her stepmother's house, little Lizuca decides to take Patrocle, her doggy, and return to her grandparents who lived near the grove. With the night coming, Lizuca falls asleep in the forest. In the dream she has, the grove turns into a magic world inhabited by the Romanian fairy-tale traditional characters. And when she wakes up, her grandparents find her and take her home.

The film premiered in Romania September 29th, 1980. It received the Honorary Diploma at the Gijon Film Festival in 1981 and also Best Fairy Tale Film Award at the Moscow Film Festival, the same year.