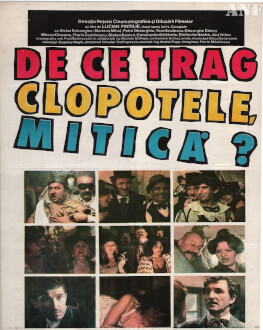 WHY ARE THE BELLS RINGING, MITICA?

Produced by: Film Houses 1 and 5

Didina Mazu (Tora Vasilescu) is Pampon's mistress (Victor Rebengiuc) and also in love with Nae Girimea (Gheorghe Dinică), the barber and the Don Juan of the neighborhood. Nae is Didina’s lover but also Mita Baston's lover who is Crăcănel's mistress in her turn. A letter from Mita to Nae found by Pampon in Didina’s room will cause a scandal and things will get completely out of control.

The film did not pass the censorship commission's control at its completion in February 1981, being banned. The film premiered October 29th, 1990.