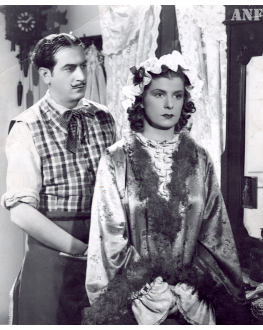 Screnplay: Jean Georgescu, adaptation of the play with the same title by I.L. Caragiale

After a night at Union open-air revue, master Dumitrache (Alexandru Giugaru), a wealthy merchant and a captain in the civic guard of Bucharest of year 1876, strongly believes that a bold young man tries to make a pass to his wife, Veta (Maria Maximilian). But in fact this demagogue newspaperman by the name of Rică (Radu Beligan) intents to date Ziţa (Florica Demion), Dumitrache's sister-in-law. Chiriac (George Demetru), Dumitrache's right man and shop clerk who really is Veta's lover also gets involved in this merry-go-round of jealousy. When Ziţa calls him, Rică goes to the wrong woman, Veta, thus starting the hysterical reaction of both the husband and the lover who want to shoot him. The young man's trying hard to get away from his trackers raises a laugh, but when Ziţa comes to the spot and clears the matter up, she gets master Dumitrache's consent for her relationship with Rică.

The film premiered in Romania March 22nd, 1943. The actor Radu Beligan makes his debut in this film. The film was forbidden after 1945. It was screened again on the occasion of the centenary of Caragiale, in 1952.