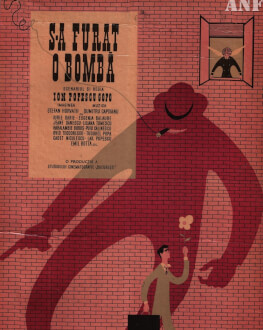 A BOMB HAS BEED STOLEN

Without knowing it, a young man looking for a job gets hold of a briefcase hiding a nuclear bomb that some thieves had stolen. The policemen and the thieves have quite a few disputes until one of the thieves notices that the young man has the bomb. In the altercation that follows, a part of the bomb hits the ground, but the mushroom of its explosion will be suppressed with a cap by a child.

The film premiered in Romania January 23th, 1962 and it had an international festival circuit. In 1962 itwas selected in the Official Competition of the Cannes Film Festival.

ORICE, ORIUNDE, ORICÂND / EVERYTHING EVERYWHERE ALL AT ONCE