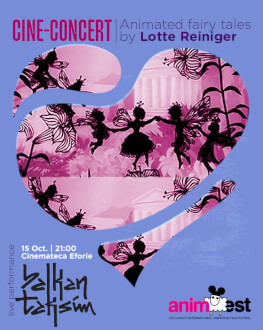 Lotte Reiniger was one of the 20th century's major animation artists, pioneering a unique and distinctive style of black and white silhouette animation in her interpretations of classic myths and fairy tales. She created a series of fairy tale films based on the Brothers Grimm, Wilhelm Hauff, Hans Christian Andersen and the stories from “One Thousand and One Nights”.

Animest revisits ground-breaking animation from the legendary Lotte Reiniger, this time with music composed and interpreted by a Romanian band.

Balkan Taksim is currently one of the most original bands in Romania. It is a collaboration of artist Sașa-Liviu Stoianovici and producer Alin Zăbrăuțeanu, and promotes a combination of rhythms and electronic arrangements, sounds from the Carpathians and tunes of Balkan and Anatolian inspiration, resulting in an energetic and innovative creation.

At Animest, the band will give a cineconcert, interpreting music to a series of films by world-famous Lotte Reiniger.