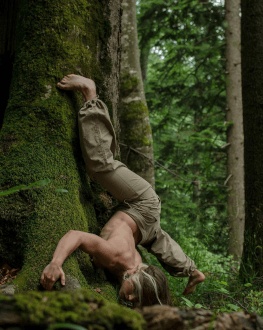 The movies are presented in the chronological order of their realisation and reflect both the restrictions and the possibilities generated by the unpredictable context of 2020. From a series of artistic manifests recorded in the absence of frameworks for continuing the activity, towards the use of alternative spaces such as museum and nature, Canned Body is an invitation to come closer to the romanian contemporary dance scene, addressed to the large audiences.

”We believe that the dance artists and their art have the ability to trigger cognitive, emotional and movement processes with an important function in the development of humanity and society.” (AREAL Collective)

Message for the International Dance Day 2020 from …

24 minutes of reflection around the need to dance and the written result of this emotional and cognitive process. Any resemblance with collective thoughts or others' ideas is entirely random.

”I wish you a happy birthday and many years together, my dear dance! After all, dance will survive.”

”My message is simple: there is no(thing) without dance. Many years to come for those who care about dancing (from anywhere, in any form, anytime).”

”Dance is an universal language. You don’t need a translation. Read it, move it, borrow it and stamp it on yourself”.

During the state of emergency generated by the coronavirus, choreographer Cosmin Manolescu signed daily the mandatory declaration and went outside to dance with the sky, the birds and the walls of the buildings, in an instinctive attempt to connect with nature and the empty city. This is how this hands-dance appeared, having as background the skies of Bucharest and Bușteni.

The movie is a representation of the body in its states of tension and fight against the virus, an attempt to encapsulate over time the difficult experience of this precarious period that we are passing through.

”Perspectives” and ”Terminal Obsolescence” have been realised in may 2020, in collaboration with the composer Sabina Ulubeanu and the poet Robert Elekes and are part of the performative diary ”Body in relation with poetry, music and visual arts” realised by choreographer Cosmin Manolescu at the invitation of the Agency of the Romanian Cultural Institute from Bruxelles.

Immersed in a fragment of the Dead Rooms exhibition of Gregor Schneider from the MARe Museum, a performer interacts with a large sculpture and a series of photos, embodying a frontal attack on anguish, fear, and death. The movie proposes a gentle reflection on the never ending process of life and the finite aspect of human beings.

More than a meeting place with a picture from the museum, ”Meeting Anca Mureșan” creates an open dialogue between dance and visual arts. The picture seems to reinvent itself and passes beyond a lifeless piece in a museum and the performer becomes part of the exhibition. The spots of color generate movement and sound, creating space for an infinity of reading, parallel stories and intersections of artistic actions.

”Minute universe” and ”Meeting Anca Mureșanu” have been realised within Meeting Room Laboratory, an artistic interdisciplinary tandem residency, part of  ”Dance at MARe" project, developed by MARe Foundation and co-financed by the National Cultural Fund Administration.

In august 2020, 6 months after the outburst of coronavirus in Romania, 10 courageous people and choreographer Cosmin Manolescu went outside to dance with nature, sun and sand of Corbu Beach, in a dance retreat organized outdoors. This is how ”Imaginarium” came into existence, a movie realised with the support of the Romanian Cultural Institute from Prague.

“SUNLESS” was filmed remotely in 2 different countries and 3 cities (Bucharest, Timisoara and London). The partners and cohabitants of the performers became the main cinematographers and production assistants and got some of the most amazing shots of this film, under Corina's guidance. The movie questions the concepts of dance and body, asking what moves when everything is still and what is vulnerability when there’s nothing left to strip?

The environment around is shaping us and the way we move, we think, we feel. It contains possible identities we can slide through, combine, and find our unique expression in our ongoing way. Our mind is the inner environment we journey through, a rough one, with fragile segments, with risky spots. The more restrictive a situation, the more creative you can become.

I see space as an invisible portal into time. With the matching mindstate, you can travel to different times, discover ancient or future characters, fragments of lost rituals, reliques of creatures, glimpses of legends. When the river subsides, stories and rocks flow.

”Calcar” and ”When the river subsides” are part of the project Love for Forest, a cinematic dance study exploring the bio structure of the forest in interaction with the human body and imaginarium, co-financed by the National Cultural Fund Administration.

CANNED BODY is an AREAL event within THE BODY SEASON @ONLINE.