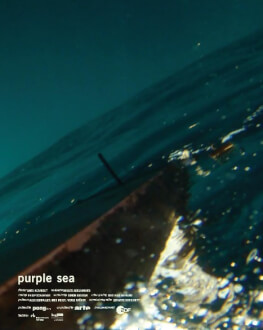 The fact that, more and more often, people outside the American-European area take charge of their own representation isn’t only a symbolic gesture of decolonizing the imaginary, but it is also an opportunity to explore the hidden corners of cultures that were neglected or even trampled down by Westerners. One often expects a self-portrait, be it a collective one, to be more revealing than any other study made from an external standpoint. Therefore, a viewer might meet Amel Alzakout and Khaled Abdulwahed’s film with these expectations: after all, “Purple Sea” is a rare case of reversing the common perspective on migrants, of taking the cameras out of the hands of the journalists and the members of nongovernmental associations, and bringing them straight into the hands of the protagonists of the dramas we’ve been constantly watching for years, in a more or less distracted way, on our screens. Amel Alzakout is a Syrian artist who, like many others before her, leaves her natal country to come to Europe, a purpose for which she embarks on the now infamous crossing of the Mediterranean Sea. And indeed, the crowded ship sinks near the coast of the Lesbos island – and the long hours of anxious waiting are captured by the waterproof camera which the filmmaker has hanging on her wrist. From off screen, in an elliptical manner and in an almost dream-like tone, Alzakout recounts the journey which lead her into the chaos we’re witnessing. The shock, as well as the revelation of the film resides in its lack of factual information, of instructive qualities: the images are unclear, frequently forming an indistinct mix of forms and colours representing limbs, clothes, or humble objects which now look like artefacts of a civilization swallowed by water; the narrator is imprecise, sometimes generic, other times very personal. We are denied the access to the truth of the migrants' experience, and the film’s radical aesthetic parti pris never allows us to believe, with the self-indulgence characteristic of the cinema spectator, that the fact that we feel as if we were among the castaways is one and the same thing with actually being one of them. (by Liri Alienor Chapelan)

Amel Alzakout (born in 1988 in Syria) is an artist and filmmaker based in Leipzig. She studied Journalism at the Cairo University, Egypt (2010-2013) and Art at the Weißensee Art Academy in Berlin, Germany (2017-2018) and she is currently studying media art at the Academy of visual art (HGB) in Leipzig, Germany.

Khaled Abdulwahed (born in 1975 in Syria) is an artist, photographer and filmmaker based in Leipzig. Between 1996 and 2000 he studied Fine Arts and Graphic Design at the Adham Ismail Art School in Damascus, Syria and at the Frederick University in Nicosia, Cyprus. In 2018 his short film ”Backyard” celebrated its world premiere and won the CNAP (National Centre for Visual Arts) award at FID Marseille.