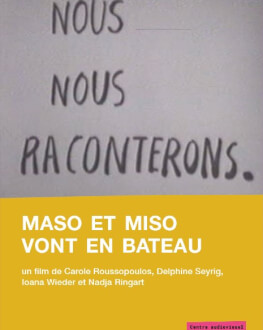 One of the most exciting films made by the feminist group “Les Insoumuses” (a compound term which would roughly translate as “The Disobedient Muses”), “Maso and Miso Go Boating” is a ludic essay, full of verve, and a bitter humour of rare beauty. Some sort of cinematographic ready-made, sarcastically commenting on an episode of the cultural TV broadcast “Apostrophes,” moderated by the famous journalist Bernard Pivot in the 1970s, the main guest of which was Françoise Giroud, secretary of state for women’s issues, this naughty and ironical film doesn’t spare any of the improper remarks made by the one who, due to her ministerial position at that time, was supposed to fight for French women’s rights. Only that Giroud’s interventions are, almost every moment, totally inappropriate for the public office holder that she is. During the show, in the context of declaring the year 1975 as the “International Women’s Year,” Pivot broadcasts a series of misogynistic declarations of men in positions of power, while the [female] politician is invited to comment on them. Yet Giroud, in her attempt to adopt a moderate approach, and to not overly offend an audience otherwise used to gloss over such macho perorations, finds all sorts of ridiculous explanations for each of them. As a consequence, Delphine Seyrig, Ioana Wieder, Carole Roussopoulos, and Nadja Ringart have at their disposal a very rich material to express their indignation, their disapproval, or their disgust, stopping and replaying some of Giroud’s declarations, commenting on them off-screen or via inserts, or mocking them through songs with multiple meanings. To such a superficial attitude and such bizarre positions like those of Giroud’s, one can only answer in similar registers, meant to expose her hypocrisy and her incompetence. (by Andrei Rus)

- you can use screenshot for the two realisators : ©SCUM Manifesto / CaSdB

A table. Carole Roussopoulos on one side, Delphine Seyrig on the other. In between them, a televison. Delphine is reading extracts from the "S.C.U.M. Manifesto" (Society for Cutting Up Men) by Valerie Solanas’ eponymous manifesto from 1967 - then out of print in French -, while Carole is typing the text with a very noisy typewriter. The first sentence, stating that "the male is a biological accident, an incomplete female, a walking abortion, to be male is to be deficient," is read by Delphine Seyrig, as well as the whole selection of the text. From time to time, they stop and turn up the volume of the television to watch news of male-dominated world violent events. The seriousness of Delphine reading such a radical statement, together with these "TV pauses," creates a filmic caricature (a hilarious one) giving us the opportunity, as with the film ”Maso and Miso go boating,” to see and reflect on what was then considered as "normal"… and is unfortunately still so current. (by Vanina Vignal)