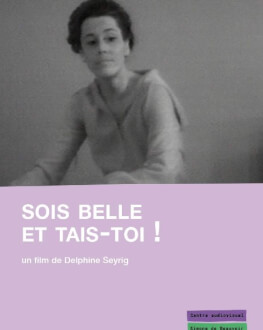 On gender equality in the film and theatre industry

We propose a discussion where we reflect upon the practices that are meant to improve the gender balance and representation in the film and theatre industry – from taking concrete steps in education (both formal and informal) to fostering gender equality across such areas as festival curation, the production chain, film and theatre criticism, decision-making and more. We invite our panel guests to consider how the local industry could become more inclusive, accessible and safer from a gender perspective; how we can empower the voices of marginalised groups and raise awareness among film and theatre practitioners, stakeholders, as well as the audience.

The structure of “Be Pretty and Shut Up!,” Delphine Seyrig’s sole finalized feature as a director, is, apparently, very simple: 24 actresses, many of which, like Jane Fonda, Jill Clayburgh, or Maria Schneider, were world-famous in the mid 1970s, are interviewed on their artistic careers. Without any other commentaries and narrative or stylistic artifices, the film simply collates the confessions which recompose a desolating patriarchal landscape, full of abuse and inequalities of all kinds, owed to the fact that each of the protagonists try to perform in a professional environment suffocated by misogynistic attitudes. Although they are of different ages, have very diverse temperaments and ambitions, and belong to various cultures, these women went through similar experiences with men in positions of power (agents, fellow actors, producers, directors), offensive experiences, oftentimes even dangerous ones as far as their psychological or physical integrity are concerned. The intensity and the level of intimacy of the discussions taking place between Seyrig and her interlocutors turn the viewing experience into a very exciting one, at the end of which it’s impossible not to understand the necessity of some international feminist movements like the recent Me Too in a more complex and more emotional way, with inside arguments coming from intelligent women. What’s surprising is that, almost 50 years later, there doesn’t seem to be significant improvement when it comes to the relationships between men and women in the artistic environment and - unfortunately – in many other professional environments. (by Andrei Rus)