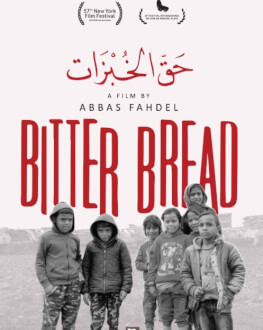 The dramatic situation of Syrian refugees has become a regular presence on the laptop and TV screens of Europeans, reaching a regrettable point where only sizeable tragedies, claiming many victims, can still cause a media stir. Just as in the face of any other horror unravelling at a safe enough distance, public opinion has grown desensitised, accepting the unacceptable as part of “the current state of affairs.” Iraqi documentarist Abbas Fahdel does not mean for his film to reawaken the world’s dulled empathy by bombarding it with shocking images of the Syrian conflict. His approach is much simpler and more efficient: by choosing to portray the daily life of a Lebanese refugee camp, he reminds us that the insidious violence of deprivation, humiliations, hopelessness transcends the boundaries of a warring country and spreads wherever they may step foot. The protagonists of “Bitter Bread” confront their fate with dignity: children play, the young envisage a future — in most cases — far away from Syria, the elderly reminisce. Fahdel gathers all these subtle nuances which emerge from conversations around broken stoves or during exhausting physical chores, and uses them to paint a tender portrait of a community that has been uprooted and mistreated, that is now resigned, but also empathetic, and that shows an overwhelming ability to regenerate. (by Liri Alienor Chapelan)