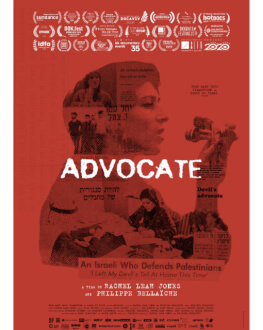 In Israel’s juridical landscape, everyone seems to fear the lawyer Léa Tsemel, the face of militancy and of the unabated fight for justice in a world overrun by chaos and resentment. After a career of 50 years of political trials born out of the never-ending conflict between Israel and Palestine, she has made a strong name for herself that still stands today: the “terrorists’ lawyer,” sometimes at the risk of herself becoming a victim of violence and revenge. In a televised interview from the ‘90s, she makes her position clear: terrorism is a means of fighting for freedom and independence, and the Palestinians have every right to raise their weapons in order to free their homeland. With the inevitable loss of all trials in which she defends them, her perseverance seems all the more bizarre, turning into an extreme form of militancy for the Palestinian cause.

Constantly shifting between her image as devil’s advocate and that of human rights fighter, Léa Tsemel’s figure, putting aside all paradoxes, reveals itself straight out of the Judaeo-Palestinian history, experienced raw not as her co-nationals have, but from the opposite side of the barricades, from amongst the accused. (by Andreea Chiper)