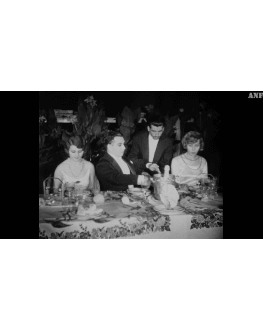 During one Easter Night, little Leiba Zibal, a Jewish boy, is deeply touched by the image of Maria, a little Christian girl of the same age. The years go by and as Zibal grows old and advances socially from salesman to innkeeper and then to banker, his passion for Maria whom he meets on several occasions remains unchanged. Finally, the banker tries to use his financial power to win Maria's favors when she goes bankrupt, but the girl turns him down because she loves someone else. Zibal doesn't give up and one night he tries to break into her house, but Gheorghe, Maria's manservant who once was a hired man at the Jew's inn catches him and ties him up wanting to kill him. In the end the manservant takes pity on him and sets him free, and Zibal leaves shamefacedly.

The film has no opening night in Bucharest, being screened at Cetatea de Baltă and Vălenii de Munte as per some notes of those times. It was screened as a sound movie at the time. The National Film Archive keeps a 1440 m long silent version of this film.