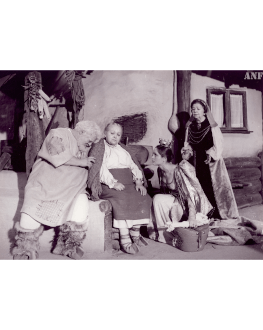 An old couple (Mircea Bogdan, Eugenia Popovici) adopts "a child", a strange creature come to Earth from another world. When he grows up, their matchless son (Marian Stanciu) builds a gold bridge and he is awarded the hand of the emperor's daughter (Diana Lupescu) in marriage. Noticing that her strange husband turns into a handsome prince at night, the princess throws his clothes on fire, thus forcing him to go back to where he came from. She follows him to that loveless world, and her strong feelings for the prince change the absurd laws of the land.