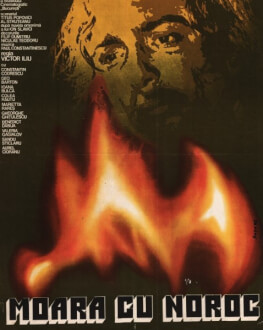 THE MILL OF LUCK AND PLANTY

Covetous for wealth, the shoemaker Ghiţă (Constantin Codrescu) moves as innkeeper to “The Mill of Luck and Plenty” with his wife Ana (Ioana Bulcă) and his mother-in-law. There he meets Lică Sămădăul (Geo Barton), a brigand who has committed numerous robberies and plunders and, little by little, he becomes his accomplice. Being devoured by the desire to become rich, Ghiţă closes his eyes to the nearness between Lică and Ana and tries to betray Lică. In the end Ghiţă kills Ana as he cannot stand the adultery that he himself provoked and he is killed in his turn by one of Sămădău’s men. Caught by the gendarmes, Lică commits suicide.

The film premiered in Romania January 26th, 1957 and it was presented at the Cannes Film Festival the same year.