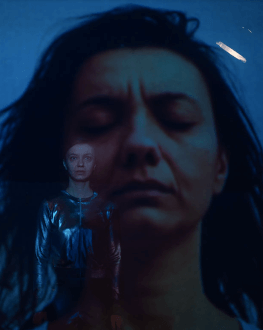 "300 thousand years ago, somewhere in the south of South Africa, I laughed and smacked my brother with a stone when he said to me: 'Don't go towards the tiger, remember how we he ate the second domestic dog in history, like a dodo. When the tiger stuck his neck in my throat I realized that my brother was right and I wanted to admit my mistake, but I had no vocal cords anymore. I died almost immediately after, without the chance to give my optimistic genes any further. The future is depressing.”

The show follows the psychological path of a person affected by anxiety and depression, from attempts to rationalize what happens to them, to efforts to accomplish everyday tasks, to those of maintaining the appearance of normality. Although the triggering factors are found somewhere on the outside, the struggle is conducted entirely inside, between the different inner voices that scream, inhibit, scare, in a polyphony that leaves no room for the peace in which solutions can be sought and found.

The show is part of the Intensive Interior project, which brings to the fore the topic of psychological disorders of the anxiety-depressive type, by carrying out a theatre performance and an exhibition, based on a period of documentation.

The event is part of the Fabrica in Tranzit project.