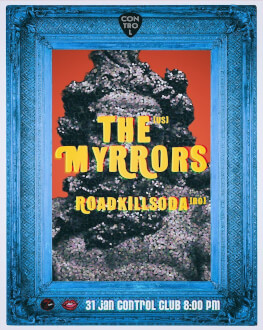 The Myrrors are an experimental psychedelic rock band from Arizona, formed in early 2007. Using basic concepts like minimalistic chords and patterns, but layer and arrange them in a way that most would consider suitable, their sound thrives off a desert-rock feel. Their music captures the spirit of the American Southwestern landscape and its harsh mystic beauty.
The group disbanded in 2009 but eventually reformed in 2013. The following year "Burning Circles in the Sky" was reissued in a number of limited edition runs and they released the new instrumental EP "Solar Collector" on both cassette tape and vinyl. Their second proper studio album, "Arena Negra," was released in 2015.
In 2017 they released Hasta la Victoria, a challenging album which juxtaposes natural environments with political upheaval. The new album has the energy and spontaneity of acid-rock improvisation with studio production. The guitars that were ever present on previous releases are absent replaced by a variety of organs, keyboards, flutes, tanpura, violin, bouzouki and many other instruments.
The band is currently touring Europe until March.

RoadkillSoda is a strong cocktail of several rock genres, leaning heavily on stoner rock and grunge. The group started off as a jam session in a cold, dimly-lit room filled with smoke and music blasting through the walls. Later that year, as spontaneous as the entire project, the debut EP "A Fucked Up Trip Gone Bad" pops up. In less than a year, the band wrote, recorded and produced the first official album, "Oven Sun".
In 2014, RoadkillSoda released „Yo No Hablo Ingles" and in 2016, after a year full of activity and some member changes, the band released its first-ever acoustic album, "Space Echo and Time".
Their latest album, called “Mephoabia”, was released in November 2017. The standout feature on the album is the psychedelic/stoner based jams, mixed with various variations of vocals, from punk-styles to classic grunge.