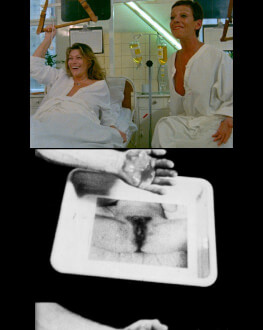 At the same time as Carole Roussopoulos and Delphine Seyrig in France and other artists within Women’s Liberation Movements all around the world, in 1972 Austrian artist Valie Export wrote a feminist manifesto called "Women’s Art", in which she highlighted the cultural and social implications of western white elitist male domination, male fantasy and male control of the arts - for centuries, womanhood has been presented by artists who had no knowledge of what it is to be female -, and developed her ideas in her own art. With her film "Menschenfrauen" (1979), she states Women (Frauen) must be allowed to be human beings (Menschen) and not only wives raising the kids of their men: "We must establish a human society in which motherhood does not restrict a woman in her creativity and determination" (V.E.). This film portrays Franz, a journalist in simultaneous relationships with four women: his wife Anna, his mistress, a liaison with a single-mom and another one with a former college girlfriend. A central conflict for each of these women is the fact they are mothers or would-be mothers and the prospect of going childless isn't desirable for any of them. After seeing through Franz playboy’s game, the four women will attempt to break free one way or another. Valie Export explores here the figure of a variation of women with her own specific language, without being afraid to experiment and break the usual way of narrating a story: interrupting it with black & white flashbacks, re-enactments of the same sequence by both characters swapping roles, split screens, grotesque staging of dreams, etc. It is all together narrative and anti-narrative, a free performance allowing us to go beyond these love stories to be able to reflect on it, with Valie Export.(by Vanina Vignal)

* The film is not recommended under 18 years

One of the legendary personalities of contemporary European art, Valie Export made feminist films to an equal extent, many of which present or expand on some of her performances. Preoccupied, in the ‘60s and the ‘70s, with examining the ways in which the patriarchal culture of the era used to relate to the female body, associating it with the libidinal yearnings of men or domesticating it in accordance to all sorts of outdated formulas, the artist was aiming to draw attention to these abuses at all costs, oftentimes going - under the influence of the Viennese activist movement -  as far as subjecting herself to physical sufferings meant to symbolize the break with the past and the revaluation of her own body in harmony with new principles. The three short films of the program are definitely the most stylistically radical in the entire selection. None of the films puts forward a narrative, in the true sense of the word, nor do they properly document a phenomenon or an action from the immediate reality. What they do document instead are Valie Export’s performances, which work as purification rituals on the path towards the recuperation of one’s own femininity, in its various instances. To this day, the most shocking of the films remains “Man & Woman & Animal,” which presents the act of masturbation of a woman in a bathtub, having a shower head at hand, but whose face always stays outside the visual frame. The direct references to Gustave Courbet’s famous painting, “The Origin of the World,” are not accidental, only that the lasciviousness of the naked body depicted in that representation is demystified here, as it is replaced with a new, animalic representation of female sexuality. (by Andrei Rus)

* The film is not recommended under 18 years

Valie Export studied at the School of Arts and Crafts in Linz. She is a prolific creator of fiction films, avant-garde films, video tapes, expanded cinema, digital art, performances, photography, installations, sculptures, objects, tapestry, and drawings, as well as publications on contemporary art history. Apart from all these, she has also taught design, visual media, and film classes at institutions such as the College of Arts in Berlin, the University of Wisconsin, and the School of Media in Cologne. In she 1970 published the ”Vienna - Image Compendium of Viennese Actionism and Film”, in collaboration with Peter Weibel, which resulted in a one month conditional imprisonment sentence for the spreading of pornography. In 1977 her film ”Invisible Adversaries” was nominated by the jury for the Österreichische Staatspreis Austrian state award, but Minister Sinowatz vetoed the nomination. Export is a founding member of the Austria Filmmakers Cooperative (1968) and of Film Women International (UNESCO) together with Susan Sontag, Mai Zetterling, Agnes Varda, and others. Since 1980 she also manages a production company Valie Export Film Productions in Vienna.