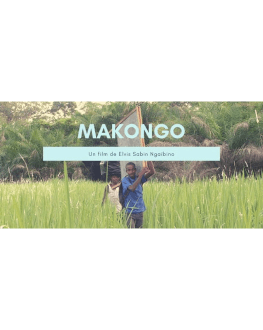 Oftentimes exoticism lies in the eyes of the beholder; in cinema, however, where we have at least two viewers – the filmmaker and the audience, it’s not rare for the honest representation that the former aims to create to nevertheless serve as material for the fantasies of the latter. The film "Makongo" (“Caterpillars”), by the Central African director Elvis Sabin Ngaïbin, manages a clever combination of events which may fascinate on account of the distance which separates them from the everyday life of a Western spectator, and from conflicts known to all underprivileged communities around the world: the struggle for integration, for social equity, for education, and for the just evaluation of their work. Although they climb trees using lianas and they go caterpillar picking in the tropical forest, the two protagonists, André and Albert, members of the pygmy community, and thus marginalized by their conationals, live in a state of poverty made immediately recognizable by globalization, from wherever you’d watch it. At school, the two youngsters have to learn who Voltaire and La Bruyère were to be able to go to high school; when they get their certificates, the principal accuses them only half-jokingly that the minority that they come from is the one which bears the blame for not knowing how to make themselves tolerated by the majority. The ironies, the offensive remarks, and the hostility of their commercial and personal relationships with the others at first sight look like they don’t affect them anymore, but in reality they are the driving force behind their efforts to educate the children from the village. The filmmaker understands the importance of their attempt, and the camera lingers over the faces of students of all ages. The moment when the two volunteer teachers, returned from town with a modest sum of money which covers the school registration fee for only some of the children, are forced to draw lots with the names of the lucky ones, is the emotional climax of an otherwise very subdued film. (by Liri Alienor Chapelan)

Elvis Sabin Ngaïbino, a geology graduate, has always dreamt of working in cinema. In 2012, together with some friends, he founded the Académie du Cinéma Centrafricain, an association focused on bringing together cinema-lovers. With limited means, he produced and made films for the Central African television, until the day he crossed paths with those from the Ateliers Varan, where he took documentary filmmaking classes. This enabled him to shoot ”Docta Jefferson,” the portrait of a neighbourhood pharmacist. The film was screened at several international festivals.