Between 1987 and 1997, famous Hungarian director Tamas Almasi made a series of eight films in which he examines his country’s transition from a planned economy to a free market society. The films talk about the plight of the Ozd steel factory, about its workers and their city - about the fate of the industrial working class in what was once called the “Worker’s state.”

After many false hopes and disappointing surprises, having already witnessed the fatal ending of the factory complex, in ”Barren,” the 6th film of the series, the plant fully closes its doors. There is no more hope and many of the former workers are struggling to survive from one day to the next, even if this means stealing leftover objects or materials from the abandoned, empty factories. Although the whole site is partially demolished, the security teams guarding it chase after the people who dare to trespass it, despite being aware that the former workers really have no other choice, having lost their jobs and their position in a society that is now devastated and no longer has a use for them. These families are being brutally and systematically evicted from the houses they cannot afford anymore - the changes in society have turned them into squatters. As always, the Romani people are the first to lose their jobs and, regretfully, to be marginalized. While this is not a film “about the Romani people,” we understand that in Ozd, like in many other ex-communist Eastern-European cities, life is now harder for the ex-workers who happen to be Romani. They are trapped at the bottom of society's ladder. (by Vanina Vignal) 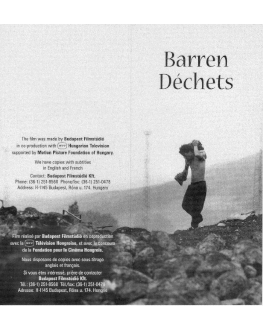