The Exit of the Trains 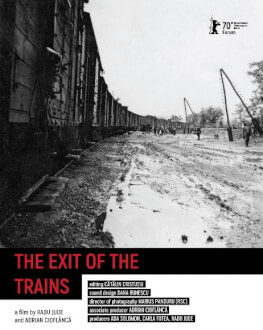 The Exit of the Trains

Dozens (or maybe hundreds) of rare photo-portraits of the victims of the 1941 Iași Pogrom, discovered in the archives by historian Adrian Cioflâncă and filmmaker Radu Jude, paint a vivid picture of one the most heinous atrocities to take place on Romanian soil in the 20th century. In a polyphony of voices and views, just as many personal accounts, taken from the official statements written by the victims’ families and witnesses to the events, retrace the extent of the brutality shown by the soldiers and the locals who carried out the antisemitic criminal plan. As spectator to this dense exposition of events, read in neutral voices that, more often than not, don’t underscore the obvious gravity of some of the testimonies, it’s impossible not to feel increasingly and acutely more overwhelmed by the horrors these people experienced and ashamed that, in all likelihood, you haven’t paid them their due respect of reflecting their on individual fates, rather than as part of a collective massacre. And at a certain point, fairly soon during this long and important document(ary), you begin to realise that even this accumulation of personal, often detailed testimonies can’t reproduce, in all its complexity, such an event, whose far too many arcs and ramifications still elude those that can be expressed with words. (by Andrei Rus)