Heimat is a Space in Time 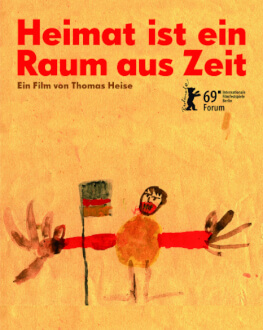 Heimat is a Space in Time

How does one picture the evolution of national identity and of the homeland in Germany in the past century? Thomas Heise allows us to explore this by staging stories of four generations of people in his family, who thus become a reflection of the conflicting and often violent events in Germany’s history. The events are being retold from the perspective of someone within the GDR, the filmmaker’s native country, a country that no longer exists.

The director reads - in voiceover - diaries, family love letters, even a school essay about war, we see images of children’s drawings or photographs, but also filmed images of today’s Germany. This entwinement of archival footage with various landscapes, unaccompanied by any commentary, enables us to draw our own parallels between the past and the present, and to reflect on what led from one historical event to another. This great film by Thomas Heise is a very subtle exploration, both on a personal, as well as on a political level, of trauma, grief and of the ways in which new generations inherit the memory of the past. (by Vanina Vignal)