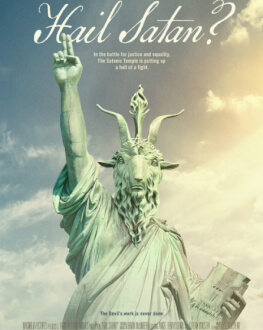 The question mark in the title is an invitation. Or perhaps a prayer for intercession. America has fallen on hard times: believers have voted into the White House a man who, though guilty of all seven capital sins, sonorously promises a Christian infusion into the secular state. A group of folk seemingly escaped from a circus beset by budget cuts fight for the separation of church and state not by using the devil’s tools, but, rather, by using the devil as a tool. Thus, a statue of Baphomet is put forward to balance out the Ten Commandments monuments proposed in and around state institutions. The culprits for the stunt are a relatively recent group: the Satanic Temple led by the pseudonymous Lucien Greaves, as befits an equally recent adversary: Ten Commandments monuments began mushrooming around the entire US only in 1956, when they appeared as promotional items for Cecil B. DeMille’s movie featuring Charlton Heston. This, like the film, is a farce about a subject that is dead serious. (by Mona Nicoară)