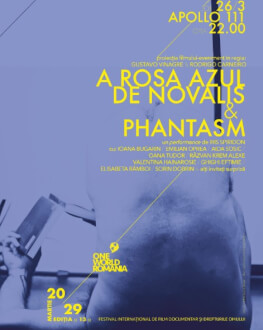 A PERFORMANCE COORDINATED BY IRIS SPIRIDON

For a large number of people, one’s sex life and phantasies can bring about an agonizing feeling of guilt. Many are not accepted by society and, what is more, cannot accept themselves. But we all have phantasies and it’s natural for us to accept them, to try to fulfil them and especially to understand them, by expressing ourselves through art or simply by communicating with each other and understanding that the lack of dialogue and of public events directly tackling sexuality and the various ways to explore it often lead to intolerance.

One World Romania #13 will be organizing a special event, coordinated by theatre director Iris Spiridon (“Psycho,” “The Day the Sun Disappeared”), a one-time only performance which will take place on Thursday, March 26th, at Apollo 111.

“Phantasm” will happen straight after the screening of one of the most compelling films in the “Political Bodies” section, “The Blue Flower of Novalis,” whose atmosphere and protagonist inspired the creation of this event.

Marcelo Diorio believes that in a past life he used to be Novalis, the German romantic poet, whose ideal was to find the “blue flower,” synonymous with that aspirational meaning of life, knowing at the same time one can never attain it. In fact, his relationship with the past is extremely relevant for the person he has become over time: he has come to the conclusion that all past generations of women and men in his family, accustomed to conform to social norms without exploring their own inclinations — especially when it comes to sexuality — have created the karmic circumstances that have now enabled him to carry out such probes. For this reason, his main existential pursuit is to accept those parts of the body deemed inferior in Christian moral tradition, to endow them with as much importance as certain aspects of humanity deemed noble, to indulge and contemplate them. Fittingly, the film opens with an extreme close up around the anus and ends with a foray inside the protagonist’s anal orifice. It is a symbolic image — much like the “blue flower” for Novalis — of his interest, through all sorts of ritualistic devices, in the exploration of homosexuality, and with the aspiration, on this level, to find the meaning of life and even God. (by Andrei Rus)