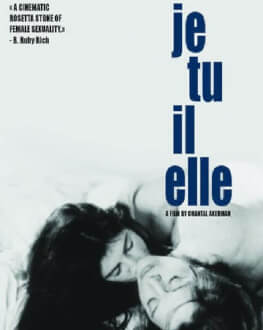 Chantal Akerman’s first feature, “Je, tu, il, elle” shuns any normative reading, though without resorting to a convoluted narrative or to situations clearly symbolically charged. On the contrary, all the actions of the protagonist – played by the filmmaker herself – have absolute, if not even primitive, specificity: she sleeps, she eats, she undresses, she gazes at herself, she has minimal human contact with a lorry driver and with a former lover, she has sex. Individually, these micro-events stand out especially due to their timing: cinematic duration overlaps with viewing duration, thus creating a sense of doleful melancholy which becomes the core of the film’s sensitivity. Together, they forge a sort of narrative thread and provide the bare minimum of emotional reference points to allow for the viewer’s own interpretation. (by Liri Alienor Chapelan)