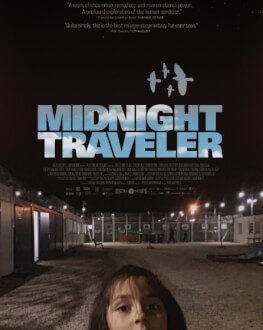 “Midnight Traveler” follows the misadventures of an Afghan family, made up of the parents and their two young daughters, from the moment they flee their home, fearing that the father would be murdered by Talibans, until they find a place to accept as political refugees. The raw images filmed on an iPhone by the father — who, in fact, is also credited with making the documentary — are emblematic for millions of other families, forced to go through similar critical situations, sometimes without a chance of survival. But these crises also reveal an altogether different portrayal of their daily lives, that only an inside perspective can achieve in the thick of the events.  And, indeed, the most poignant and particular depictions of the condition of contemporary refugees occur when the 4 are able, for a brief moment, to find peace and function like a normal family, relax, cook together and enjoy each other’s presence. As far as I can remember, no other similarly themed documentary has struck me as more relevant and complex in its rendering of the daily lives of nowadays refugees. (by Andrei Rus)